Athens is the cradle of European culture. In General, how did it happen that Greece in ancient times won the love of the entire European community? The art of Greece greatly influenced the further development of European cultural values. 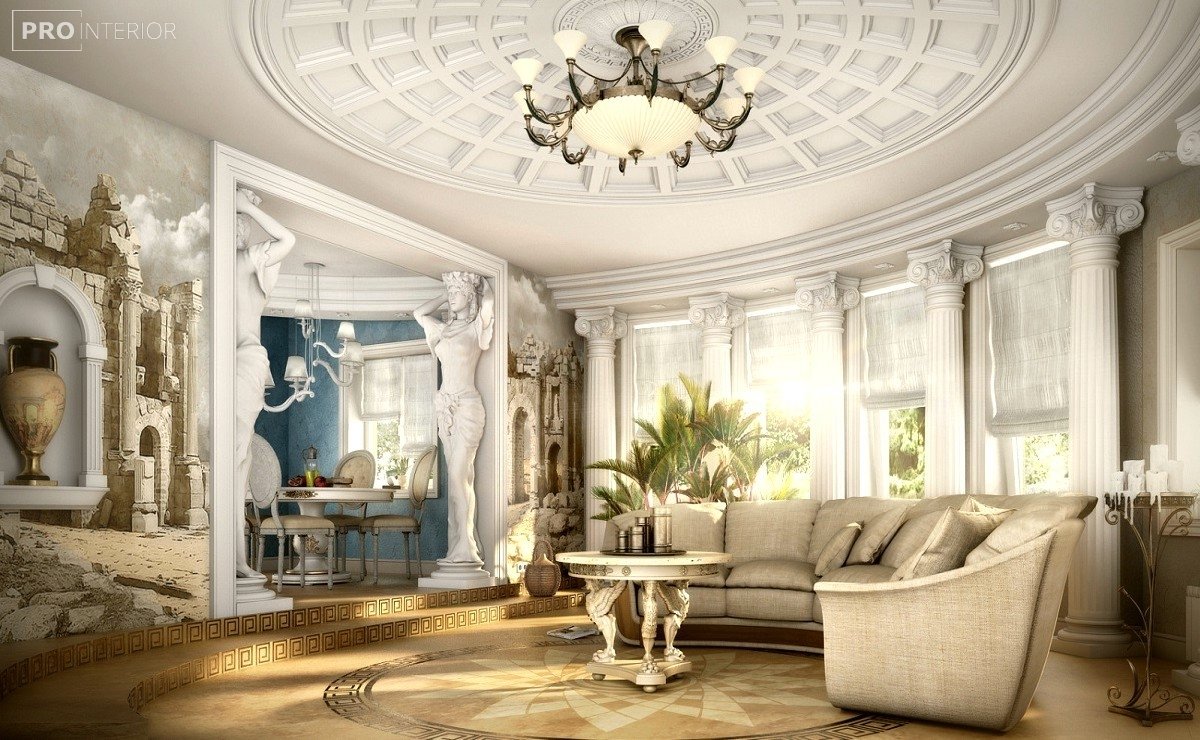 Ancient Greece was famous for its thinkers and poets, praised the beauty of the human body, buildings and temples. The law of the Golden section was discovered. Rhodian noble marble of black or pink rocks was mined in quarries, from which houses with numerous columns and a snow-white marble floor were built. 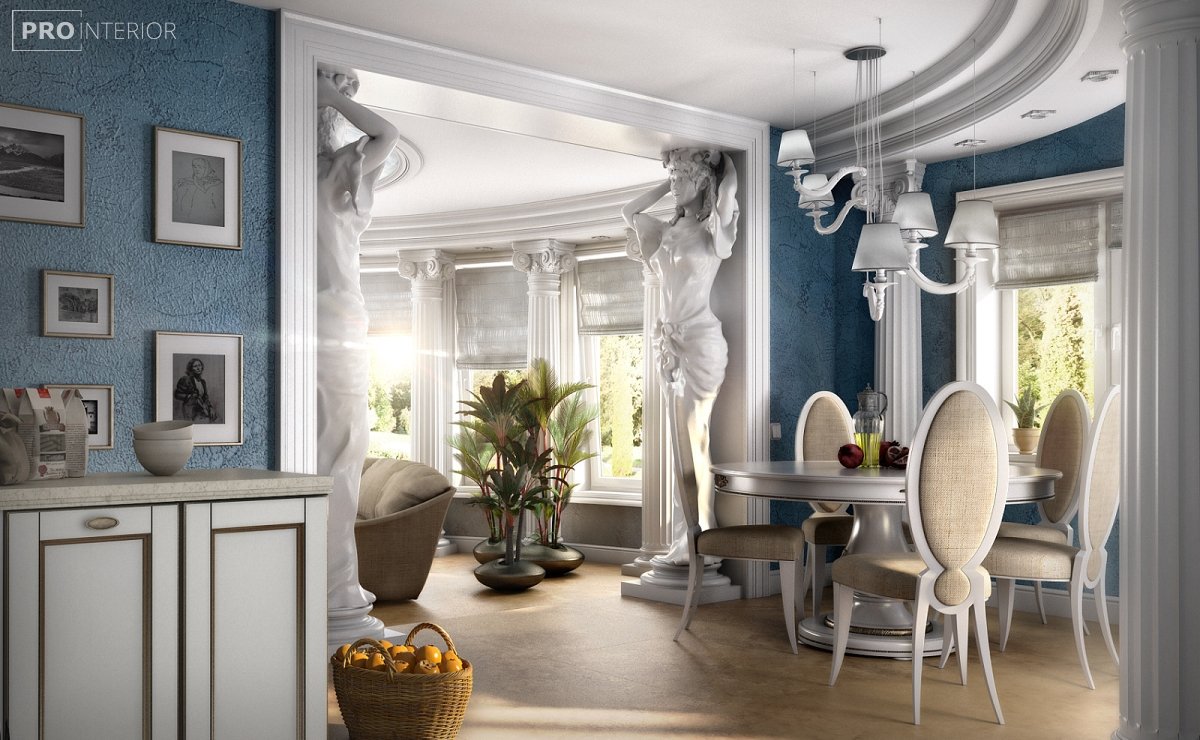 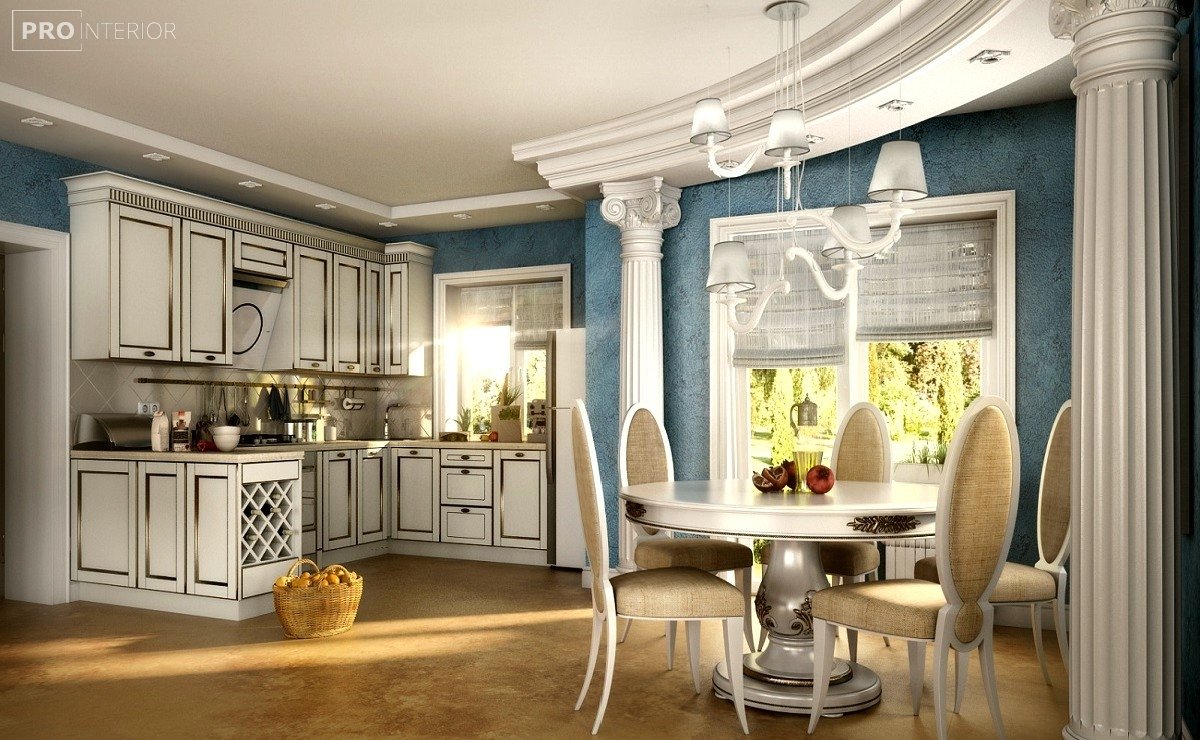 So, the Greek style in the interior:
Ornaments of Greece are an eternal classic in the form of a circle inscribed in a square. Therefore, such motifs can slip on the ceiling in the form of a border, and on the floor in the form of a mosaic. Textiles also convey the atmosphere of the southern country well. Textiles here like natural. The walls in the Greek way of decoration are somewhat rough, and have a white color. Sometimes you have to specifically make them uneven, so that the relief of the walls was more expressive. 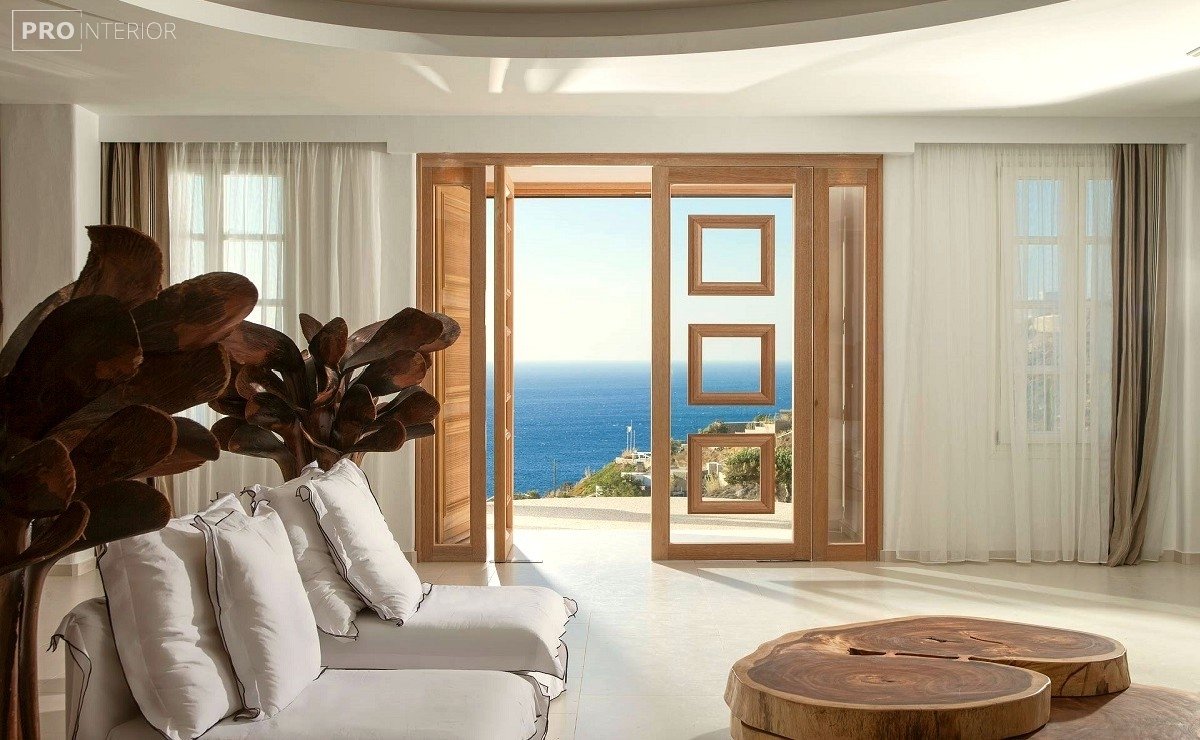 A lot of small plastic, busts, sculptures, these are the heroes of Greek myths. Floor vases like amphorae emphasize the originality of this classic style. 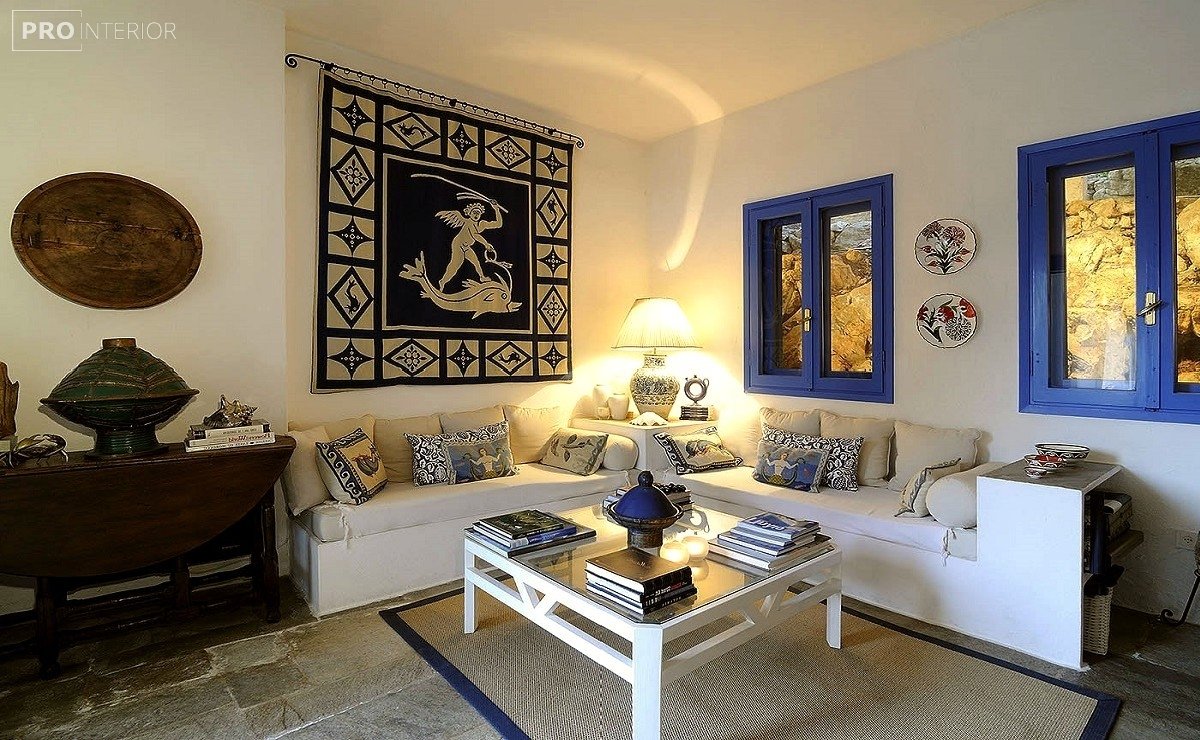 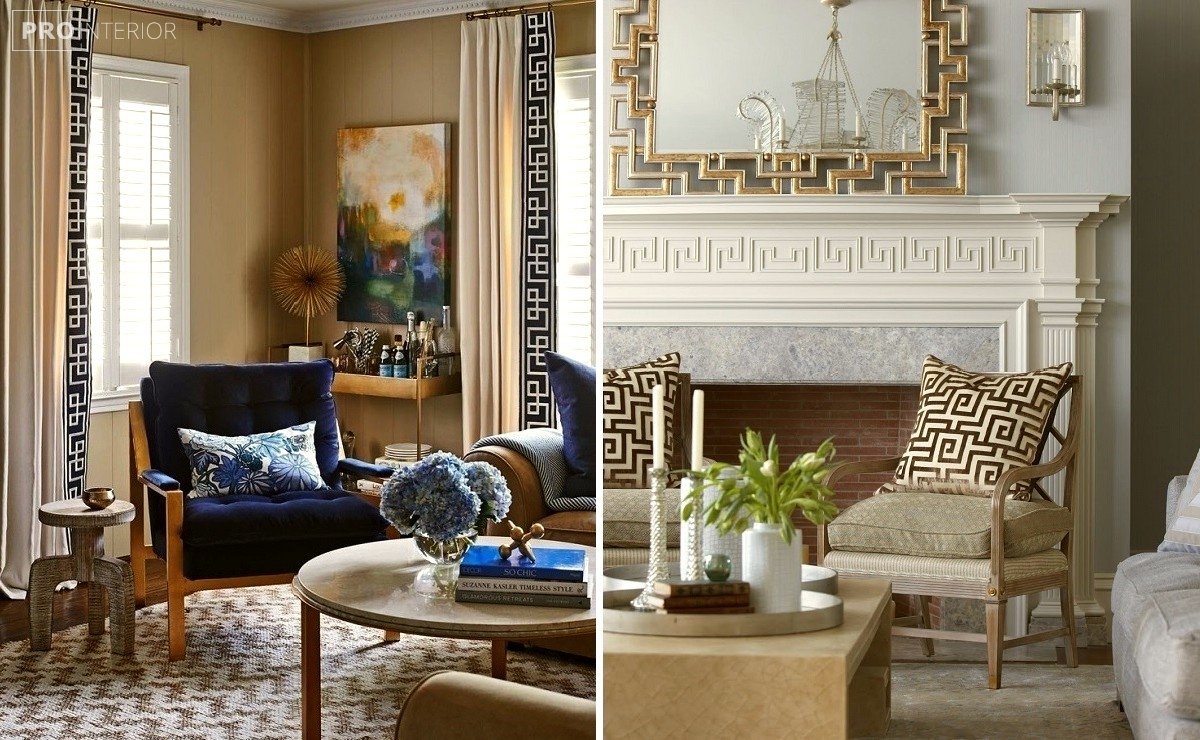 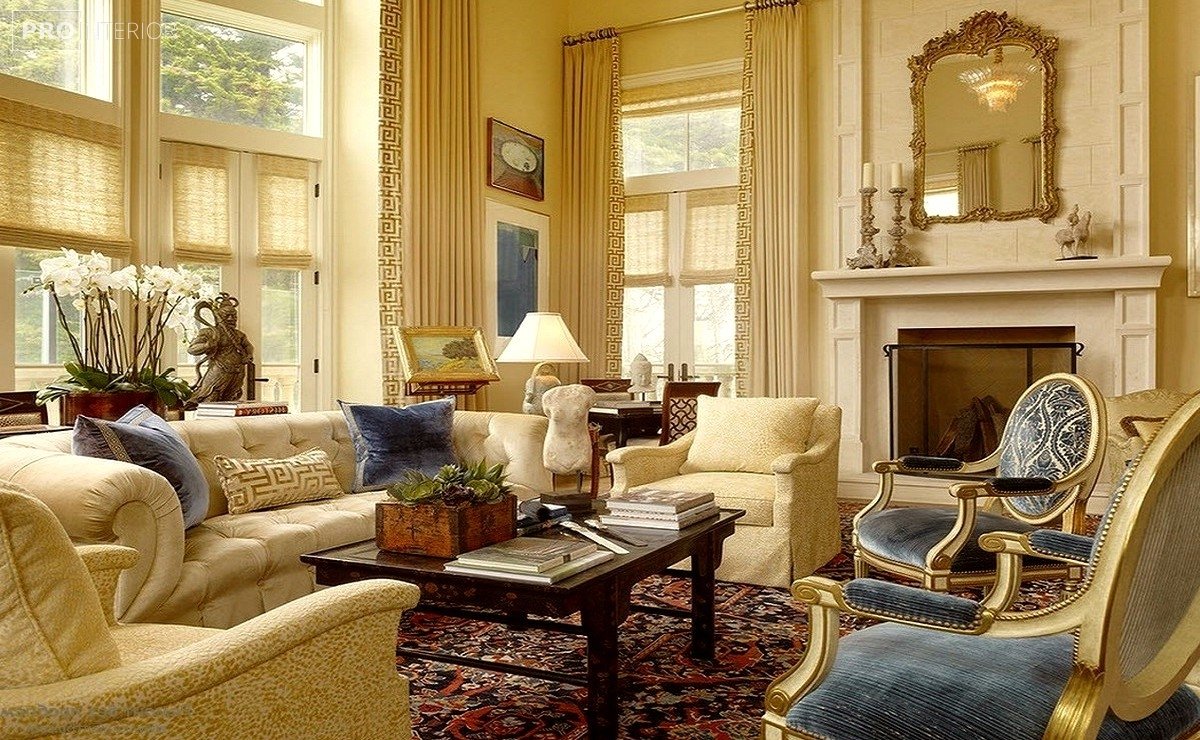 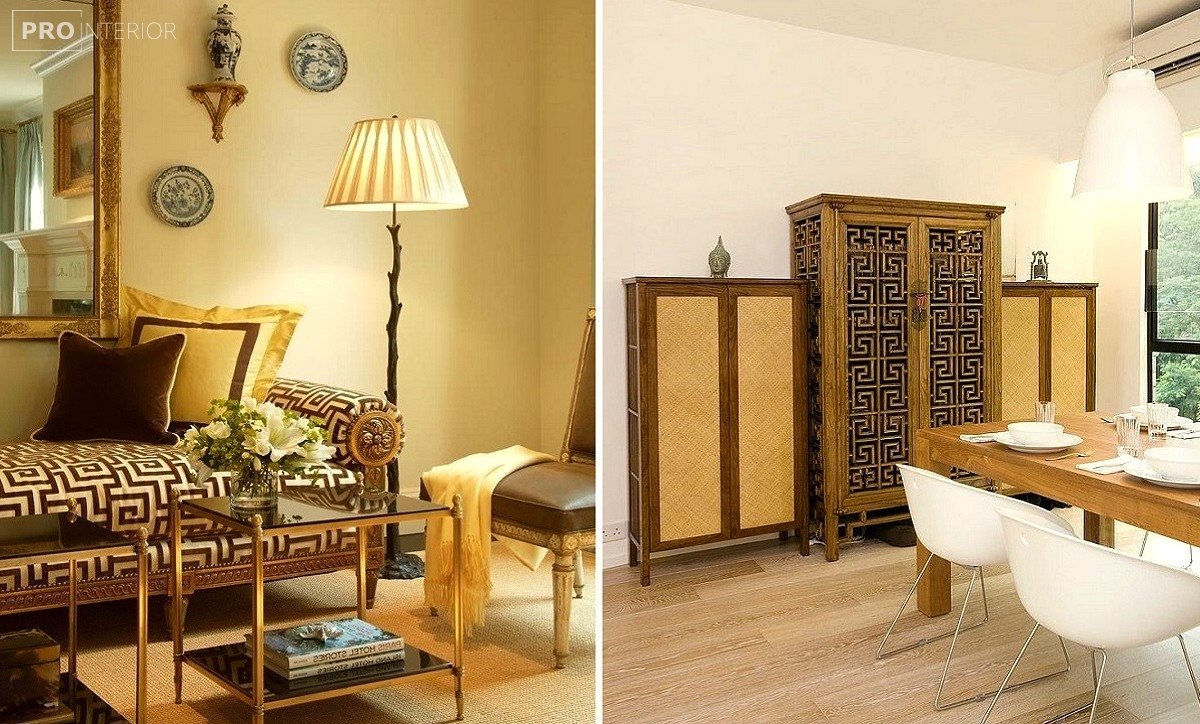 Greek mosaic is well suited for decorating a bathroom or terrace.
It is no wonder that the philosophy of a harmonious way of life was in the blood of the ancient Greeks for many years. In this regard, in ancient Greece gradually developed its attitude to the arrangement of housing. 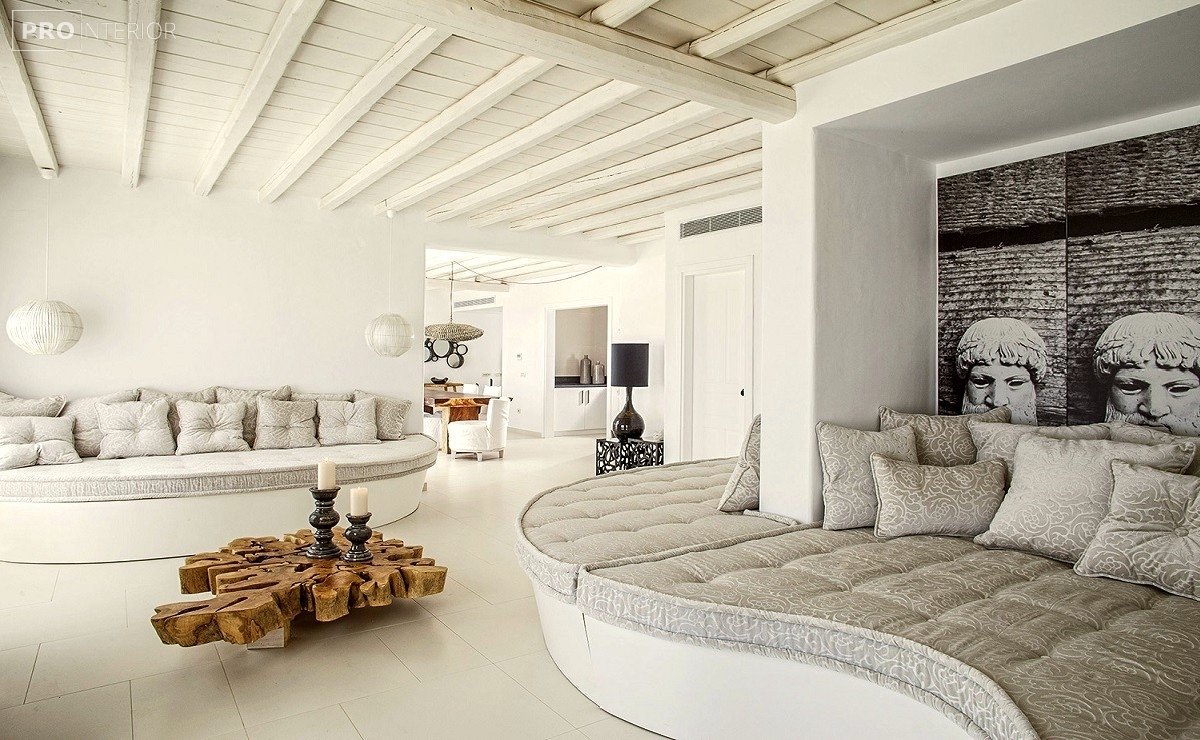 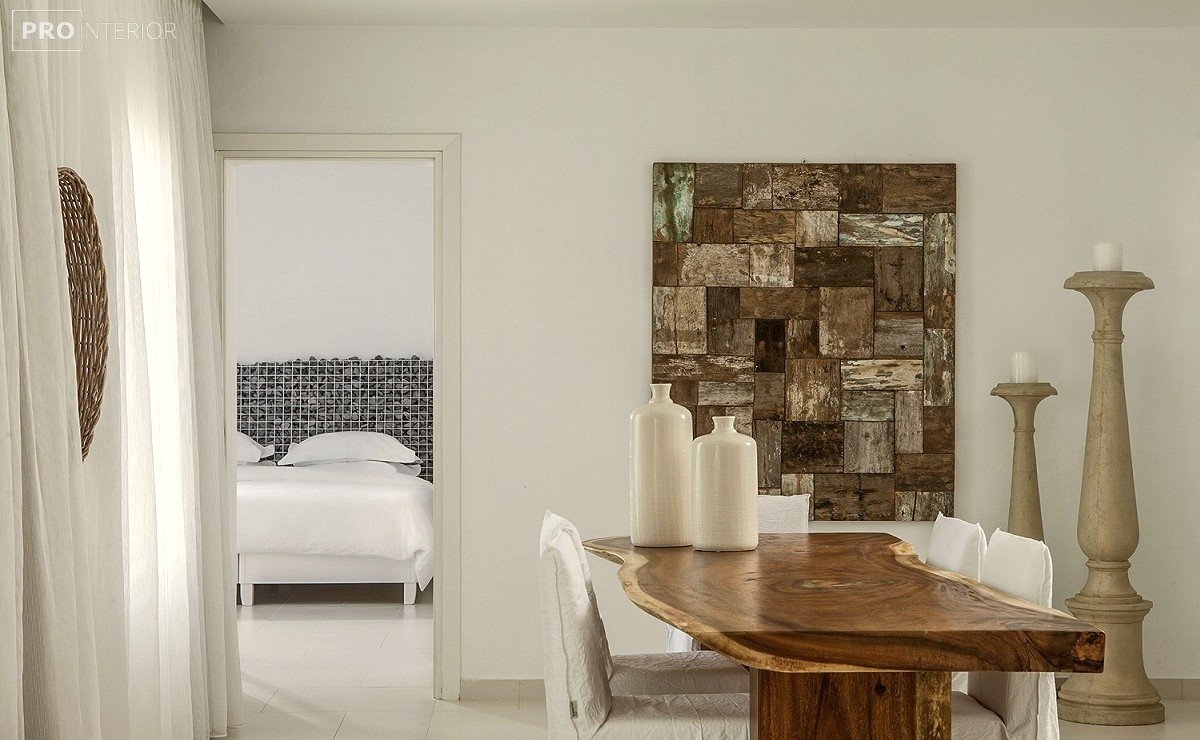 No one disputes the statement that not everyone was allowed to live in luxurious palaces at that time (however, as now). But still there was a tendency: although in the houses of citizens and provincials the walls were treated with rather rough plaster, but along the walls there were columns.

Stucco ornaments on the ceilings decorated the vaults, and the floor was decorated with mosaic tiles. In some cases, the floors were simply stone to keep the rooms cool on a hot summer day.

Since the dwelling of the ancient Greek was quite simple, he put floor vases in the corners, which enlivened the interior. Vases were terracotta, marble or plaster (the latter option was the most budget). Other decorative items in the ancient Greek dwelling include small plastic and sculptural compositions of larger sizes. Statuettes enlivened the strict lines of white columns and arches. 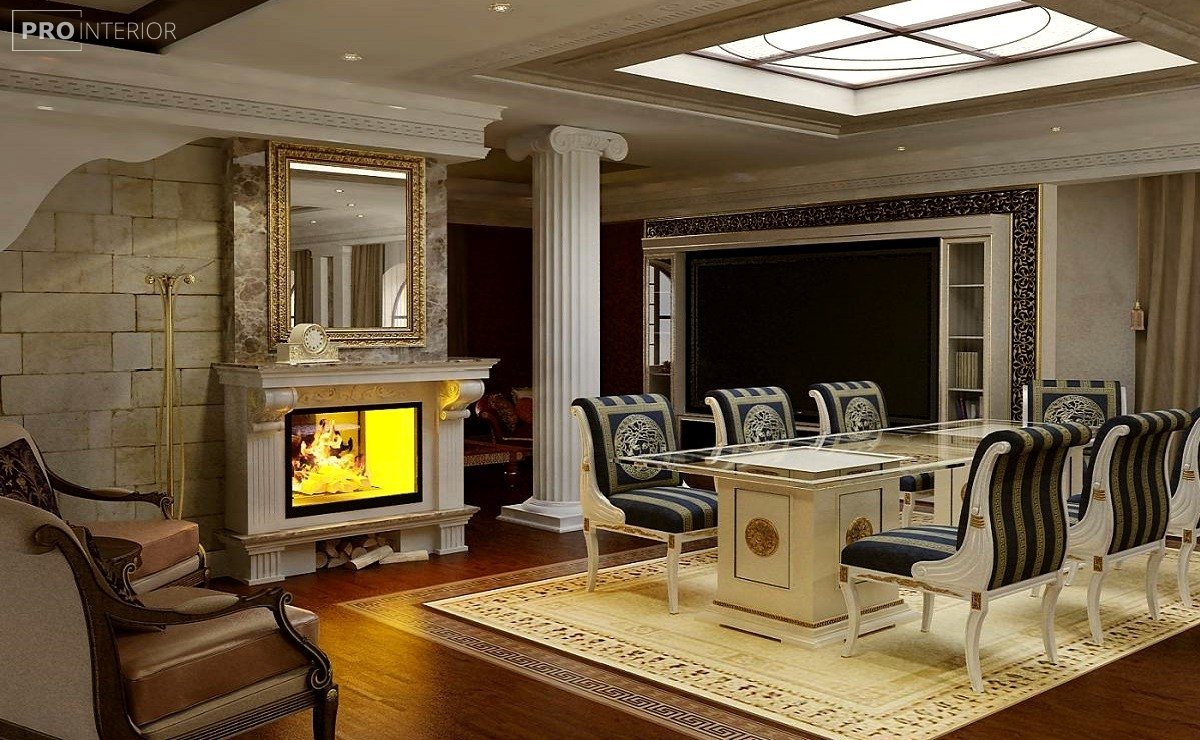 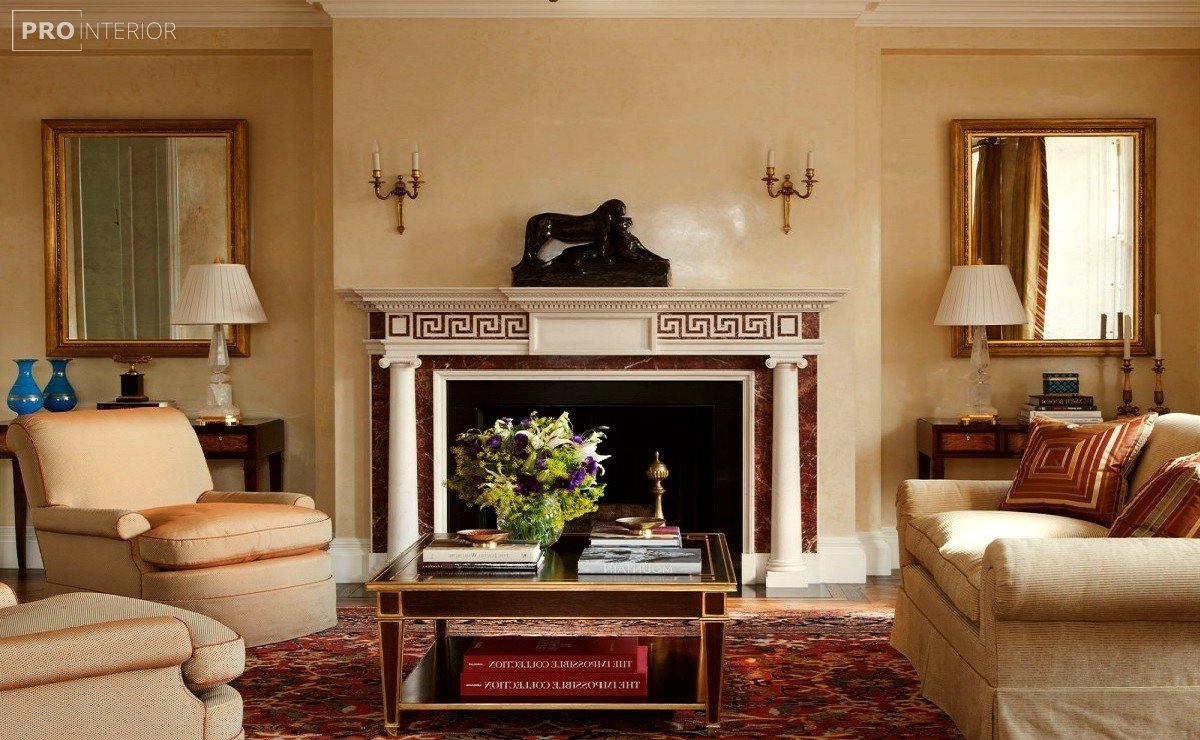 How to create this style nowadays 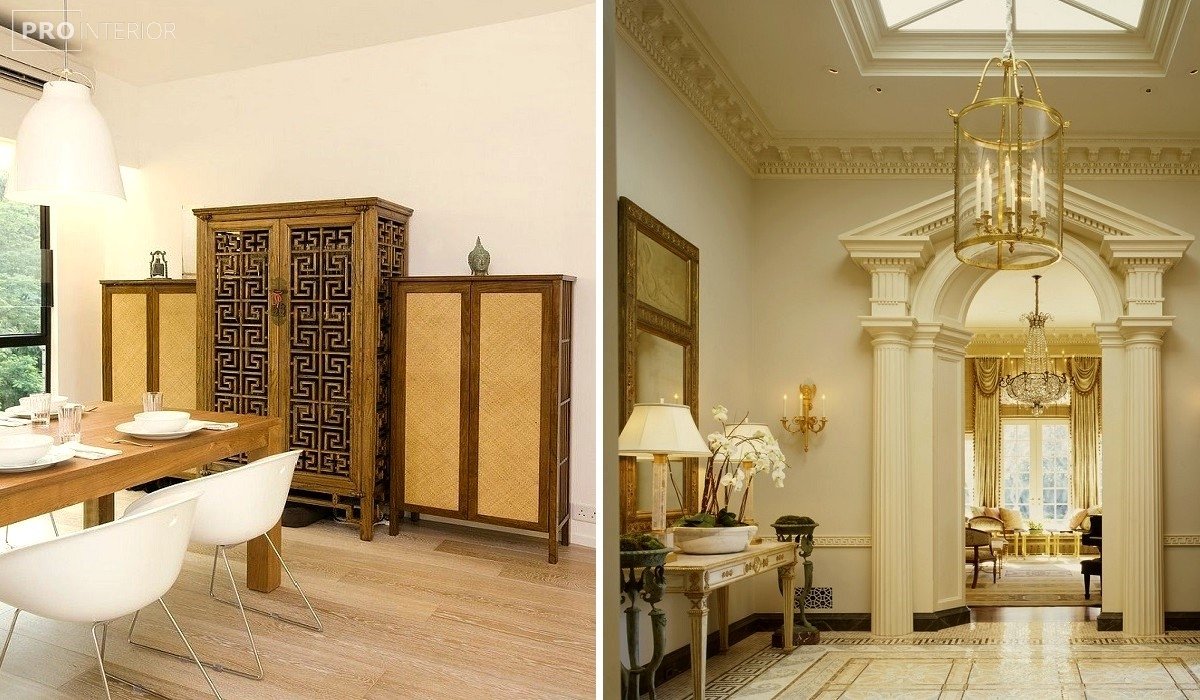 Recreating the Greek style in a modern interior, the masters remember that for its implementation need rooms with high ceilings. Then you need to decide on the finish of the ceiling, walls and floor. Placed decorative ornament on the walls or ceiling. You can stick suitable Wallpaper on the theme with Greek ornament. The ceiling is made white, along the perimeter you can put a large border of white polyurethane. Stylized columns are constructed along the walls, which can be either white or made to look like marble.

Since the Greek style belongs to the category of Mediterranean trends of interior art, the color is more appropriate blue and white. It reminds a bit of the proximity of the blue Aegean sea. The furniture is quite simple, suitable three-legged low table, which is often found in Greek homes and at least a couple of sofas.
Several sculptural busts, a large outdoor jug (amphora) in the corner will perfectly complement the impression. 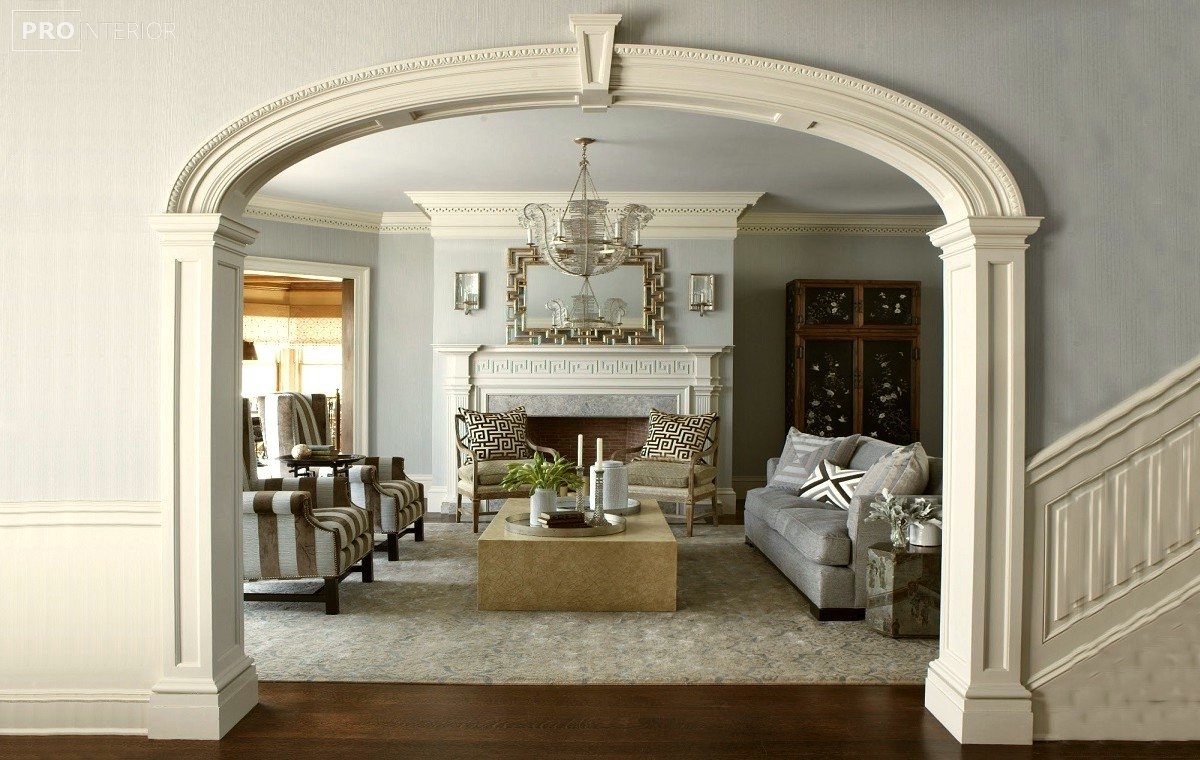